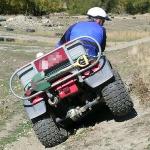 The quad bike culture on farms has always backed rider ability over safety equipment like helmets and roll bars.

Almost a third of farms visited by the Department of Labour between April and mid June were warned about using their quad bikes safely.

Health and safety inspectors visited 376 farms across the country as part of the Department’s quad bike safety campaign.

Of the 376 farms visited in the ten week period, 117 written warnings or improvement notices were issued.

On average 850 people are injured each year while riding quad bikes on farms. Five die.

The Department began its Harm Reduction Campaign to raise awareness about quad bike safety in November last year. Since April 1 this year inspectors have been out visiting farms as part of the first enforcement phase of the campaign.

•ensure riders are trained or experienced enough to do the job
•choose the right vehicle for the job
•always wear a helmet
•don’t let kids ride adult quad bikes
“Over 10 weeks our inspectors visited close to 400 farms and we’ve been impressed with the high level of awareness around quad bike safety,” says the Department’s Chief Adviser Health and Safety, Dr Geraint Emrys.

“However in approximately one in three farms visited, inspectors found areas for improvement – in the vast majority of these cases notices and warnings related to helmet use,” Dr Emrys says.

“Where notices or warnings were issued many farmers improved their practices within days of an inspector visiting – this is impressive and it’s been pleasing to see farmers taking ownership of their responsibilities.

“In one case our inspectors came across a Waikato farmer who purchased a helmet ten days before his quad bike rolled – he credits the helmet for saving his life.

“Farms are workplaces and farmers have a responsibility to ensure the health and safety of their staff – there may be consequences if someone is seriously injured or killed while riding a quad bike at work.”

The first phase of the enforcement campaign is now complete, however the Department’s focus on quad bike safety continues throughout 2011 and 2012. This will involve ongoing interaction with farmers and their communities, as well as further enforcement periods and ongoing monitoring.