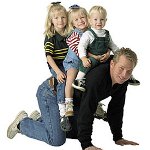 Many fathers try to have it all – time with kids, promotions at work and a spouse who shares the parenting duties.

But more are starting to say they would trade in their commute and office lifestyle for a stay-at-home role.

A recent study surveying nearly 1,000 fathers in the US working at Fortune 500 firms took a look at just how hard it is for dads to balance their work and life goals.

The study titled The New Dad: Caring, Committed and Conflicted was unveiled last week by the Boston College Centre for Work & Family.

Dads have long been confined to the role of commuting main income worker. Now the top priority of men with children under the age of 18 still living at home is the softer side of being a father – providing love and support.

More than half of all fathers surveyed said they would consider not working outside the home if the family was able to live comfortably on one salary, a surprising change in perception, said Brad Harrington, executive director of the centre.

“But there is also an inability to let go of some of the more traditional roles that fathers have played and pick up some of the responsibilities that mothers have traditionally taken greater ownership for,” he said.

For example, the study showed dads did not view day-to-day childcare tasks as a top priority, leaving a spouse to do the car pooling, diaper changes and laundry.

And, despite a desire to spend more quality time with the kids, after the birth of their children dads did not cut their work hours and said they were expected to do the same or more at the office, Harrington said.

Most dads took off one week or less after the birth of a child, meaning they missed out on an important “immersion experience” and bonding time, he said.

“Women are making major adaptations with working arrangements to be able to take care of their children,” he said, while fathers just cannot seem to strike the same balance.

Most dads acknowledged the parenting duties should be split equally, but it rarely happens that way, the study revealed.

That does not mean dads are not putting family first.

Job security was overwhelmingly important to fathers, the study showed, with high earnings and advancement taking a back seat.

New Zealand workers are happier than their Australian counterparts, a survey says, despite being paid less and working longer... read more