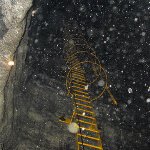 Photo from inside the Pike River mine showing the 55 metre ladder with no safety platforms.

NZ Green party MP Kevin Hague attacked the government over mine safety standards using a photo from inside the Pike River coal mine as evidence.

The picture tabled in parliament showed a 55m vertical ladder inside the coal pit. Before safety rules were relaxed under a National government in the 1990s, mine ladders were required to have safety platforms every nine metres.

Kevin Hague says safety improvements are needed immediately, but the government says there will be no changes until the completion of a Royal Commission of Inquiry into the 19th November disaster that killed 29 men.

He asked Labour Minister Kate Wilkinson if she shared the concerns of mine safety experts about standards which allowed a “55 metre high shear vertical escape ladder,” in the Pike River mine.

Wilkinson replied, “Of course we have concerns about mine safety which is why we have taken the matter of Pike River very seriously.”

Regulations introduced in 1999 require operators to “take all practicable steps” to manage hazards in the “particular circumstances” of the mine. That is “a high standard”, Wilkinson said.

Hague asked if this meant safety standards would vary across mines. He also wanted to know if “well resourced” mines would be able to afford better measures.

“The standard remains the same whether the mine is small or not,” Wilkinson said.

Hague has already demanded the government reinstate check inspectors, abolished in 1992, and a fully funded mine inspectorate, dismantled in 1998.

If proper access is gained to the Pike River mine then a full health and safety investigation is going to reveal serious shortcomings. I agree with Kevin Hague that a proper independent inspectorate should be reinstated for the mining industry in New Zealand.

The freeing up of the regulations around mine safety in the 1990’s was based purely in profit. The issues facing the building industry which was ‘liberated’ around the same time have come home to roost with the leaky homes saga.

The whole agenda of liberalisation away from established compliance regimes was purely the implementation of political theory.

Asking an industry that is in business solely for profit to regulate itself regarding safety standards was always plain daft. Standards will always vary once universal controls are removed.