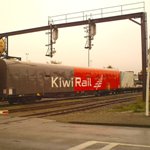 KiwiRail is to axe 40 jobs from their Hillside workshop in Dunedin and the company is calling for voluntary redundancies.

The announcement was made today after five weeks of consultation with staff who were told of the decision today, KiwiRail said.

“It is a fact that the size of the Hillside workforce has always changed according to the amount of work available and the workload there has decreased due to the completion of projects including carriage construction work for Auckland and Wellington,” KiwiRail chief executive Jim Quinn said.

Opposition MPs and the railworkers’ union have targeted Transport Minister Steven Joyce and KiwiRail over the redundancies, saying buying Chinese-built locomotives, rather than having them built in New Zealand, was costing jobs.

Thirty workers at the Woburn workshop in Lower Hutt were also expected to be made redundant. KiwiRail made no announcement about Lower Hutt today.

A Southland woman's emails to friends from her workplace computer indicating she was slacking on the job have rebounded... read more