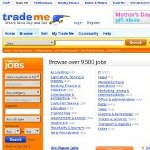 The employment market is looking up if the latest job advertisiement statistics from Trademe jobs website is anything to go by.

The April-June quarter shows a 27 percent on the same period last year.

An analysis of over 39,000 jobs listed on Trademe Jobs between April and June found all the main centres had enjoyed year on year growth of over 20 percent, and Canterbury’s listings soared 65 percent.

“The pendulum is definitely swinging in favour of the job seeker again with more jobs, less competition amongst applicants and pay packets up more than 3.5 per cent on the same period last year,” website head Peter Ashby said.

After Canterbury, the fastest growing regions for job advertisements were in the provinces. Southland rose 61 percent as the high dairy prices filtered through the wider economy.

Gisborne was next, up 47 per cent, followed by Marlborough (40 percent) and Nelson/Tasman (up 30 percent)

Auckland job listings jumped 25 percent on a year ago and Wellington was up 20 percent.

Jobs in the IT sector were up 60 percent on a year ago, driven by growth in networking and systems roles (up 121 per cent), helpdesk roles (up 112 percent) and test analysts (up 110 per cent).

Developer listings now accounted for a quarter of all the IT listings on Trade Me Jobs.

Sectors where listings had fallen falling included education (down 17 per cent), legal (down 48 percent) and healthcare (down 4 percent) on a year ago.

These figures are certainly good news for job hunters. It would be interesting to see if the significant growth in job adverts in the Trade Me website are mirrored by other advertisers.

Certainly in recruitment areas we work in there are still very large candidate pools for most jobs. The sizeable increase for Trademe may reflect to some extent their growing status as the job advertiser of choice for job hunters and recruiters.