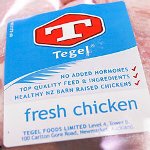 Tegel Foods has admitted a workplace safety breach after a female employee had her finger tip severed in a mincing machine.

The Department of Labour brought the prosecution in a sitting of the Christchurch District Court at Nga Hau e Wha marae today before Judge Stephen Erber. Sentencing is set down for the 29th September.

Prosecutor Pip Currie said the woman was a process worker who was working the mincing machine at the company’s Carmen Rd premises on 6th October 2010.

“Her left hand was close to the feed end of the mincer and eventually her left ring finger came into contact with the rotating blade. As a result her left fingertip was amputated at the first knuckle,” said Currie.

The company had failed to develop a safe procedure for the mincer and failed to ensure the machine was adequately guarded.

As a result of the accident an interlocking guard has been placed on the mincer and a safe operating procedure established.

The company admitted a charge of failing to take all practicable steps to ensure than an employee was not exposed to a hazard arising from the use of the machine.

When workers are abseiling down a building or doing something like operating a chainsaw they are acutely aware of the dangers and hazard management has been well thought through and acted upon.

For a processing operation like Tegel where this latest accident occurred, often the risks are not so obvious. Routine and complacency can dull the sense of awareness of danger. New and existing pieces of machinery are not always put through the rigorous hazard management plan that something with more overt serious harm implications would.

Often instructions on safe operation of machinery will be verbal, without any ongoing training and safety reminders.

The lady in the Tegel case would not have left for work that day thinking she might potentially lose a finger. But her supervisors responsible for he safety should have been thinking those thoughts. If they had then this lady would be able to count to ten instead of nine and three quarters.