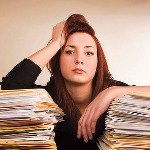 A third of Australian workers waste almost a quarter of their day at work, a survey shows.
The Ernst and Young Australian Productivity Pulse survey found the lack of productivity costs businesses more than $41 billion each year in wages alone.

The survey of 11,500 people showed the current economic slowdown particularly affects the productivity of workers who felt insecure about their jobs.

“Workers that feel insecure about their roles or are unsatisfied with their workplace have fallen further down the productivity scale as a result of the current slowdown,” Ernst and Young Oceania Advisory leader Neil Plumridge said.
The survey found that unproductive workers took fewer breaks, spent more time travelling to work and less time on leisure and recreation.
On average, people in the unproductive group spent 43 minutes longer than the highly productive group getting to work.
“This means that the top group has more opportunity for their personal life and activities such as helping kids with their homework, going to the gym, or even cooking the evening meal,” Mr Plumridge said.
The top time-wasting activities reported were waiting for approval from a higher authority, reading and responding to emails and technology issues.

Despite many Australians now working more than eight hours each day, productivity had not grown over the past decade.
Highly productive workers spent two-thirds of their time on meaningful work, they took longer breaks, spent less time travelling to work and allocated more time to leisure and recreation.
Social media accounted for only four per cent of time wasted.

The use of power saving software is a positive lead from Kiwibank and HSBC that the rest of the... read more