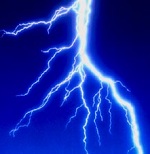 A Gisborne motorist says she was more worried about damage to her work vehicle than to herself when the car was struck by lightning in yesterday’s thunderstorm.

Janine Ehu and her passenger were driving down Childers Road about 3.30pm when they saw a bright light hit the bonnet of their car and felt a jolt shooting through their bodies.

“I said to my friend ‘did we just get hit by lightning?’ and she said ‘Yes!’

“It just felt like a sudden jolt shooting down our bodies. It didn’t really hurt, it was more of a fright than anything.”

Within a couple of minutes the shock started to set in and both women experienced tingling in their hands and began to feel lightheaded.

They noticed problems with the car, too – the motor was misfiring and it was giving off a burning smell.

“It is a new work car so we were pretty worried about that. It’d be different if it was one of our own.”

The pair drove back to their workplace where Ms Ehu works as a Family Start kaiawhina. Their manager arranged for them to see their doctors.

Both still had tingling in their arms, feet and mouths and Ms Ehu had red marks all over her back.

“We were struggling to believe what had happened to us and made a plan that if we felt strange during the night, we would get checked out straight away,” she said.

“As it turned out I was in bed by 7pm – and I’m usually a real night-owl. The doctor gave us painkillers and sleeping pills but we both had a really bad night’s sleep, waking up at every little thing.”

The 150 or so lightning strikes that hit the region yesterday afternoon lit up social media, with residents reporting events from power being blown out to fire alarms being set off.

Eastland Network manager Brent Stewart said they were surprised so few customers were affected, with only a few individual customer outages in rural areas.

MetService meteorologist John Law said he and his colleagues watched the storm happen in real time from their Wellington office.

“It was hard to pull ourselves away from the monitor and we could hear the lightning tracker constantly going off… it’s actually quite hypnotic,” he said.

Yesterday’s dramatic weather was caused when a spiral of showers from the west hit warm air, giving the showers more energy and sparking the thunderstorms, Mr Law said.

“Once the storms hit the temperature dropped from 18degC down to around 13degC and we recorded 7mm of rain at the airport in a very short space of time, so it all happened pretty quickly.”

The safest course of action was to stay inside during a spate of lightning and, if in a situation like Ms Eru and her passenger, to avoid touching any metal, he said.

Meanwhile, Ms Ehu said that today she was back at work on light duties and feeling “very, very lucky”.

“Everyone keeps telling me I should buy a Lotto ticket.”