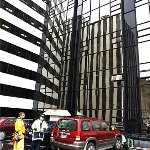 Time to buy a lotto ticket I think.

A window cleaner has fallen six storeys from a builing in Wellington but survived with only a dislocated toe.

The man fell from the Mayfair House building on The Terrace about noon yesterday after his rope gave way, partly landing on the parked car.

His boss, Mike Roche, the co-owner and director of Window Cleaning and Contractors said the man’s leg hit the bumper.

A hospital spokesman said medical staff were amazed at the man’s recovery.

“I think he’s still coming to terms with how lucky he is. It’s amazing.”

Police at the scene yesterday spoke to several people, including the man’s colleague and an office worker on one of the top floors who had waved to the window cleaner moments before he fell.

The man’s safety gear, including a helmet, helped to save his life, police said.

Earlier, Wellington Free Ambulance team manager Kate Worthington, who was at the scene, said the man had been “quite upset, as was his colleague who was with him at the time”.

St John medical director Tony Smith said it was a miracle the man was alive.

“It’s extraordinary for someone to fall from that height and survive.

“We only see people fall and survive when something significant has broken their fall and in this case it was the car.”

Dr Smith said the vehicle would have been an important factor in saving the worker’s life.

“The rope may not have completely given way, for example, and that could have helped …”

Dr Smith remembered a young man who fell from the fifth floor of an apartment building and was saved because he hit the awnings at each level.

The Mayfair Building is 13 storeys high and houses several businesses, including a dental clinic and the Department of Corrections information centre.

A Labour Department investigation has started.

Mr Roche said as well as that investigation, the company had launched its own inquiry using an independent investigator to find out what went wrong. “I don’t know exactly what happened.”

It is unlikely that the equipment has failed. The rules on certification of equipment for working at heights are very stringent. The mostly likely cause of the plunge is improper use of equipment.

If that is the case, then the training programme of the company will come under intense scrutiny.

It is such a relief though that it is not a workplace death that is being investigated.