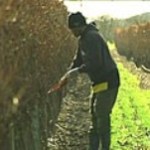 A legal migrant worker in Blenheim.

Immigration New Zealand says the conviction of a Blenheim labour contractor for employing foreign workers to enable them to remain in New Zealand unlawfully shows its intolerance of immigration fraud.

Nixon Nixon, who had been employed by Walton Services Ltd, was sentenced in the Blenheim District Court after admitting 11 charges of immigration fraud. He was fined $120 on each charge and sentenced to six months’ community detention and 140 hours of community service. His father and brother, directors of the company, were sentenced last year on similar charges.

“This conviction is a lesson to any contractor contemplating using unlawful labour.

“In this case, between 2004 and 2006 the defendants enabled numerous Indonesian nationals to support themselves while in the country unlawfully. They also exploited them financially, particularly in terms of making tax deductions that they kept for themselves.

“People in the country unlawfully need people like Nixon and his co-offenders to enable them to stay – people who are prepared to defraud both their workers and taxpayers, and to deny work to New Zealanders by engaging illegal foreign labour.

“Nixon’s offending occurred some years ago now, but his conviction is a lesson to everyone involved in the horticulture/viticulture sector that we investigate and prosecute activities that undermine the integrity of the immigration system, irrespective of time.”

Mr Stuart says Immigration New Zealand’s Recognised Seasonal Employer scheme, which was introduced in 2007, has been critical to weeding out fraudulent contractors while also providing protections for workers in terms of wage rates, minimum earnings and deductions from wages.

“The scheme enables recognised employers to bring in thousands of workers each year from certain Pacific nations to alleviate worker shortages in the horticultural sector, to the benefit of New Zealand and the RSE workers, their families and their countries.”