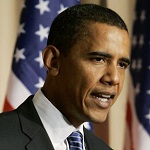 Job growth stats great timing for Obama as the electoral silly season kicks off in America.

Four painful years after the Great Recession struck and wiped out 8.7 million jobs, the United States may finally be in an elusive pattern known as the virtuous cycle – an escalating loop of robust job growth, healthier spending and higher demand.

The nation added 200,000 jobs in December in a burst of hiring that drove the unemployment rate down two ticks to 8.5 per cent, its lowest in almost three years, and led economists to conclude that the improvement in the job market might just last.

“There is more horsepower to this economy than most believe,” said Sung Won Sohn, an economics professor at California State University, Channel Islands. “The stars are aligned right for a meaningful economic recovery.”

It was the sixth month in a row that the economy added at least 100,000 jobs, the longest streak since 2006. The economy added jobs every month last year, the first time that has happened since 2005. And the unemployment rate, which peaked at 10.1 per cent in October 2009 and stood at 9.1 per cent at the start of last year, has fallen for four months straight.

If economics textbooks and the best hopes of millions of unemployed Americans are confirmed, the virtuous cycle may be under way, which would suggest the job market will get stronger yet.

When more Americans are hired, they have more money to spend. When more money courses through the economy, businesses can justify hiring more people. That means more jobs, more spending and more demand for businesses. Which leads to still more hiring, spending and demand.

That would be the reverse of the vicious cycle that took hold during the Great Recession. People lost jobs and spent less money, so businesses rang up less sales and were forced to lay off more people. That led to even less spending and more layoffs.

“The labour market is healing,” said Diane Swonk, chief economist at Mesirow Financial. She cautioned that “we still have a long way to go – years to recoup the losses we have endured”.

But it will take 6 million more jobs to get the United States back to what it had in December 2007, when the recession began. Economists forecast the nation will add almost 2 million this year.

The unemployment report was the first to be released since Republicans across the country began voting to determine a candidate to face President Barack Obama in the US autumn in an election that will turn on the economy. Obama appears bound to face voters with the highest unemployment rate of any president running for re-election since World War II. Unemployment was 7.8 per cent when Obama took office.

But the President’s re-election chances may hinge more on the direction of the unemployment rate than on what the rate is come election day. The rate was 7.2 per cent when Ronald Reagan beat Walter Mondale in 1984, but it had fallen from 10.8 per cent two years before the election.

Obama, visiting the new Consumer Financial Protection Bureau, said: “We have made real progress. Now is not the time to stop.” He called on Congress to extend a Social Security payroll tax cut that is due to expire at the end of next month.

Campaigning in New Hampshire for Obama’s job, former Pennsylvania Senator Rick Santorum claimed credit for Republicans, suggesting the gains were tied to voter optimism that a Republican would take the White House.

“There’s a lot of concern still,” added Santorum, who finished in a virtual tie with Mitt Romney in the Iowa caucuses last week. Another candidate, former House Speaker Newt Gingrich, dismissed the job gains as inadequate.

The economy still faces many challenges, however, including a likely recession in Europe exacerbated by the debt crisis there. That could drag on the US stock market, making US investors feel poorer and weighing on their spending.

“While December’s data represent good news, there is no guarantee that January will follow a similar path,” said Joshua Shapiro, chief economist at MFR, in a note to clients.